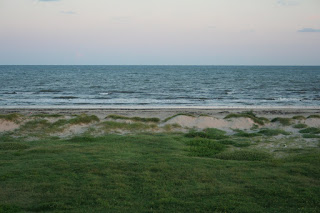 This excerpt from shiny bits seems relevant to the seclusion we're all experiencing right now. And a reminder of how important it is to feel the earth beneath our feet and the sun on our faces.

"Days passed without time. Dorie slept late into the mornings, the light disorienting her when she opened her eyes. She ate tiny morsels like rations, not speaking so words lost their meaning and the world abstracted. Books became her sustenance--immersing herself in their pages was a tonic for the despondency she felt about her separation from the real world.

She longed to sink her feet into the cool under-layer of sand, to feel the salt-sticky film on her skin after dipping into the water. Dorie reached for her coat and hat and stepped outside. Walking across the dunes to the beach, she felt as if awoken from a dream, released into a version of the world scrubbed clean, bright and pure. The green hat that Harriet had knitted hugged her head, spreading warmth through her slightly graying hair, each stitch touched by her daughter's fingers. Unbuttoning her coat, she invited in the chill of the late winter air. Endless days between November and February offered patches of sunlight like gifts, where warmth crept beneath layers of wool to reach the skin beneath. Dorie ran to where the waves stroked the sand, remembering just in time to remove her shoes before entering the water. Her feet tingled and fizzed. She stuffed her hat into a pocket lined with sand and a bleached bone like ivory that she'd forgotten was there. Splashing her face and hair re-awoke senses that had numbed, been forced dull. She longed to immerse her entire body in the sea, rinse herself of the muck that was a barrier between her and this new place.

As Dorie continued walking, the pale February sun dried the last remnants of sea water, and her skin tightened, her hair crusted and curled. She increased her pace until her breath deepened and her limbs loosened. Spring was around the corner, and she held her face up to the sun in anticipation."

(Excerpt from 'abstracted', shiny bits in between)

Popular posts from this blog

Did you know Dorie's house in Shiny Bits was based on my own little yellow house by the sea? Here it is...a nd as a bonus/extra: that amazing kitchen window I mentioned (along with a special musical accompaniment by Joe, my hubby!)
1 comment
Read more

dedication page Nan & I at her 90th birthday I've often wondered who the people are that authors' dedicate their books to, what their relationship is and why they chose them. What a huge decision. But I knew very early on that I would dedicate Shiny Bits In Between to my grandmother (Nan) and Sheila, her eldest daughter. Both women have been muses for me, and many of my artistic endeavors are rooted in their persons. I couldn't have written this book without either of these extraordinary women. *** It was the early 1930's when my curious and fearless grandmother found an advertisement in the newspaper about a job in Brasil. It sounded like an adventure, so she applied and got the job. She boarded a boat in London and crossed the seas to Brasil where she met my grandfather. Nan had children late for the era. She was over forty when she had my uncle, her last child. She had adventures to enjoy, after all. Ethel Kenning (Nan) Nan and She
3 comments
Read more